Dedicated to my Jolaoluwa, she has always been so helpful with the typing. 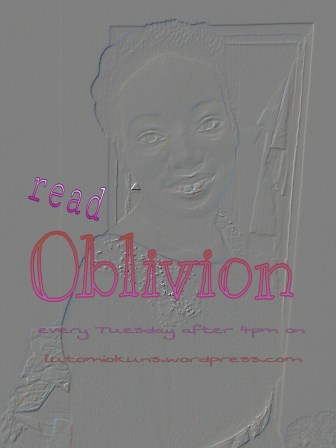 “Who told you where we usually put the room key?”
Dotun quizzed the petite form that stood before his face. It wasn’t a question as much as it was an accusation. He had gotten home a bit late which is to be expected anyway since the Martins’ party was held on the island and he resided on the mainland. By the time he got to the door, he checked his Hermes wristwatch, a gift from his late mother…whew 9:36pm.
He couldn’t understand why any young woman in her right mind would dangle rat before cat if feeding the cat wasn’t her intention.  He was puzzled to have had Regina open the room door for him, as though they were roommates.  His plans had been very simple; to just shower and sleep off while gisting Soji about the event, really that wasn’t too much to ask.
‘Regina” he tried again “Why are you in my room at this hour?”  his tone wasn’t effusive.
She was back   at his table perched on his chair and reading his book. Oh, how she ignored him. He scanned around for evidence of Soji being close by, perhaps his bag or laptop, that’d have been so comforting. The only thing that made his room out of place was Regina and her mass of red curls. The babe didn’t even say a word or flinch; she flipped a page of the novel. My approach is really getting me nowhere, he thought. Regina, a pretty thing with the ruggedness of a vixen, he knew men who had asked her out and she had rejected their offers. But when it came to him, Dotun, she became a bee; He couldn’t get it, he was not even attracted to her. He decided to dance to her tune a little.
He drew a deep breath, placed his fingers on her head and stroked her hair.  It was dreadful, but he did it anyway.
“Reggie baby, this hair is really colourful o, is it a new shade of Brazilian?” She gave him a plastic smile “No, it’s Peruvian.” She replied. Well, that was easy he thought
“So what’s up? How are you today, Princess?” he softened his voice, immediately, her eyes lit up.
“Fine”, she answered.  Ok short answers, Dotun gave smirk.
“Was Soji home when you arrived?” He asked.
“No” she replied, without attempting to look at him.
“Oh, have you taken anything? Hope you have not been around for too long?” Dotun asked, thinking was  it a crime to borrow a girl your class note, that’s how I  got stuck with  this babe.
“Dotun, you are trying to ne nice” she sneered, “I called Soji to ask because I knew you wouldn’t tell me” she smirked. Every time she did that she reminded him of the crazy old woman from Tyler Perry movies called Madea. And that Soji, the guy dumb sha, he would be on his case for the next couple of days.
He smiled “it doesn’t matter anyway, do you care for drink?’
She shook her head “Hum no, I’d take my leave now; I brought you a little something. She raised a cooler up from her side, “Its Egusi soup, with 7 lives. The soup was so delicious I wanted you to have a taste, my love.”
Dotun’s brain screeched to a halt…Egusi soup? Me? Her love! Chai, “Awh Regina, that’s so thoughtful of you” he knew he was walking on a thin rope. He feigned a yawn, and said “I need to sleep, for a while…” hoping she’d take the cue.
Regina smiled knowingly, “Dotun, I will leave now. Don’t throw the soup away” she got up, moved to his side and pecked him. And like a whiff of weak fragrance, she was gone away.
As soon as she left, he jumped on his mattress. “Ope o”, he shouted he brought out his phone, dialed Soji’s number…it rang, Soji picked
Soji: Dude, how far na?
Dotun: Ogbeni, you no well o!
Soji: Which one na? What happen?
Dotun: How you go give that girl key na?
Soji: Sho! Wetin be my own? If you see as your babe de beg me for key. She talk say she don try your number but e dey switched off.
Dotun: Chai, come see as I open my mouth, this girl lie pass monkey
Soji : You sef funny sha. You go see lying monkey and wait? Forget that bae jare. Ehen, how party? Shey gist dey?
Dotun: Gist ko, soup ni…(He hissed and cut the call).
As he closed his eyes to sleep, the only face that came to mind was a damsel, Mikhail Martins.

*****************
“In Nigeria, after every party comes a time of rest to gather yourself together. It was even relative, the more stressful the event, the more resting time needed” Bisi thought as he smiled down at Kofoworola, who laid on the King size bed in fetal position. She smiled back, he liked that, he didn’t have to use words to communicate with his wife of 23 years. She read him like a book. If he lifted an eyebrow she would say exactly what he had in mind. The Lord was truly right when he said it wasn’t good for man to be alone. He couldn’t in his wildest dreams think of a life without Kofo. She was a bundle of everything… sparky, tenacious, and disciplined. She wasn’t just a mother to his children, she was his mother.
“Iyawo mi (My Wife)” he said as he fondly called her, she look at him in response.  He said “When will your resting period be over? The party was Saturday, today is Tuesday and you haven’t been up and doing as usual Kofo”
“Are you complaining that I am home with you and not about business?” she asked pouted.
Women! Bisi thought, they have a way of misinterpreting words. He sat on the bed, gathered her in his arms and said “Babe, I just want to know if you are okay, that’s all”, he sighed and continued “You have not been bouncing up and down is not usual”
“I am fine, I will do some work from my laptop” she smiled. “Still tired though, I guess the dancing got to me”
“Ok” he said and pecked her forehead though he was not satisfied with her response, he stood up picked up his phone, typed
‘Iyawo mi, I’ll like to take you out tonight, six pm’
Then said “I have to go now, I be back late, I have an appointment” then he hit the send button.
A second later Kofo’s phone vibrated, “let me get that for you” he picked the phone from the dressing table and handed it over to her. As she read, she started giggling, saying nothing she typed
‘Leopard that won’t change his skin, do I have a choice… I’m stuck with you in a good way for life’
Hit send and stood up to join her husband who was knotting his tie…

***************
Momo raised shoes towards the camera; a pair of cyan block heels and a pair of metallic platform shoes. Mikhail shook her head, Motunrayo her best friend, was plain fun, fashionable and a foodie.  Even though they were oceans apart, there she was on bed skyping; trying  to decide which shoe Momo would wear for a gala night.
“I think you should go with the cyan heels, they’d be friendlier on the dance floor” Mikhail said
Momo threw the shoes down “I knew you’d say that, that platform shoes rock better” she pouted, immediately her eyes lit up “By the way, any gist for me?” she moved closer to the camera and raised her brows inquisitively.
Ever since she told Momo about her the Bosun-Dotun guy from her dad’s birthday, her matchmaking instinct had been up always asking after him, his picture and more questions, Mikhail had no answers to.
Mikhail stood up and pretended not to notice, “I am resuming to school next week” she’d concluded her Diploma programme at the University of Lagos and would be proceeding to complete her Bachelor’s degree in Economics and International Relations.
“And I am supposed to be jubilating abi? Please give me gist jor, when last did you see Dotun?” she hissed.
“I have no idea where he is, I only know his name and the last time I saw him was at my dad’s birthday party… Please don’t ask me about him again”
“You can google him out, Instagram, Facebook, Twitter, I am sure he is out there waiting for you” she said with evidence of lassitude.
“Motunrayo, get a life…when do you get called to Bar?” she tried to change the topic knowing Law was one thing Momo loved to talk about.
“In about thirty-six months, it’s really been hectic here o” she hissed “them wan kill me with heavy workload.” It worked so well, Mikhail thought. “You didn’t just change the topic, did you?” Momo asked
“Me?” Mikhail asked, “Now, why would I do that?” She asked feigning innocence “Oh yes, I did because my friend is about building a castle in the air.”
Momo smiled, “Smart move 1-0, to be continued…I have to go help Subomi with chores else I don’t know what form of grounding my mum would cook up this time.”
“Alright, run along sweet.  Talk you later bae.” She said mockingly.
Mikhail exited from Skype, clicked on the notepad icon and made a list of what she needed to do before school resumed. She made a mental note to pick up some clothes from her mom’s boutique the next day. As she was about going offline, a thought floated across her mind,
‘You should google Doutn Adesanjo’…

Quick question
1. Have you ever googled a crush or stalked a crush out of curiosity.
Watch out for my answer…in the meantime answer yours o

So far, I have not only enoyed your followership but also your comments, sharing of links, motivation…thank you so much. I am humbled to know I have you ought there reading. Join me same time next week Tuesday for Oblivion 10. Keep Reading, Keep Commenting, Keep Sharing and Keep Growing.
Your friend,
Lutomi Modesola Okunrounmu.